Walgreens bets all its chips on a new healthcare strategy. Will patients buy in? 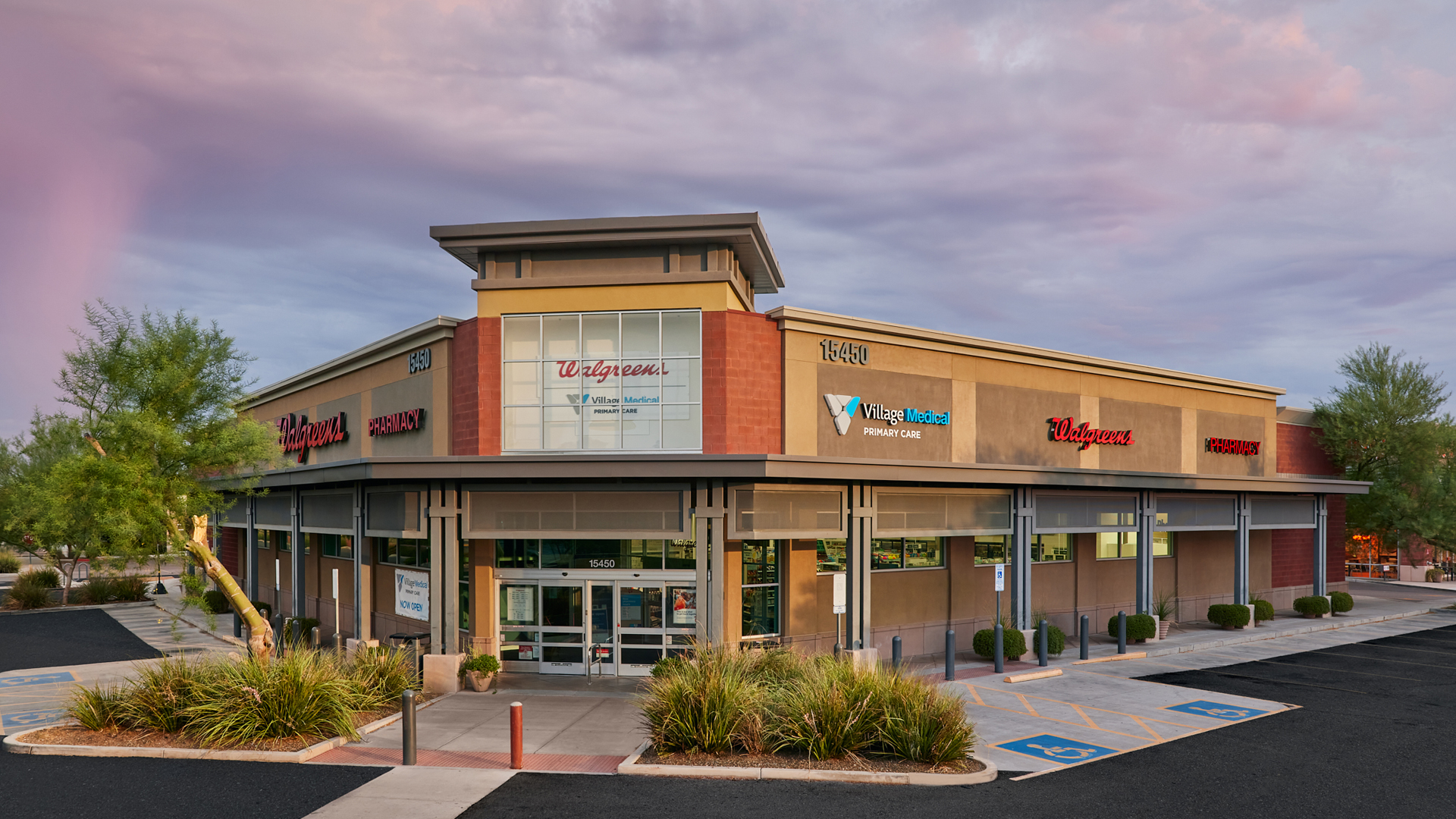 Walgreens and VillageMD have 52 co-located primary care clinics, including this one in Phoenix. They plan to open 1,000 by 2027. Photo credit: Walgreens

Eight months into her tenure as Walgreens’ new CEO, Roz Brewer explained the pharmacy chain’s growing healthcare ambitions by telling a story about her mom.

Her mother had been diagnosed with several serious health conditions, including diabetes, high blood pressure and kidney failure, Brewer told investors in an Oct. 14 call. Even with good health insurance, and family members who could provide support — some of whom worked in healthcare —  navigating her care was “confusing, unwieldy and burdensome.”

It involved coordinating her care between different specialists across different health systems, and taking time off to go to dialysis. And keeping track of the bills that kept coming in was even worse.

“This was a time when our family should have been able to focus mainly on just enjoying our remaining moments. But instead we were distracted with many unnecessary tasks and details,” Brewer said. “I just wanted to mention this experience because what I am about to discuss with you is deeply personal to me. And I want to help our patients avoid similar scenarios in the future.”

Walgreens recently debuted plans to bring together several health services, with the goal of helping patients like Brewer’s mom. Last month, it revamped its strategy, with plans to build out several primary care clinics housed under a new division of its business.

It has already made a few investments to fuel this strategy — it recently bought majority stakes in primary care company VillageMD and home care company CareCentrix — and plans to make more in the future.

The company plans to open 1,000 of VillageMD’s primary care clinics co-located with its stores by 2027, and is also renovating some of its stores with “health corners” where patients can talk to health advisors and get information about over-the-counter medications. It has already added them to 40 of its stores, and hopes to have 3,000 at scale.

Brewer described someday being able to offer a wide spectrum of health services at Walgreens’ stores, including finding a doctor, managing chronic conditions, getting health records, setting up devices, and getting nutritional and preventive information.

“Ultimately, our goal is to move toward value-based care and directly impacting costs and outcomes,” she said.

However, Walgreens isn’t the only retailer with this vision. It faces formidable competition, as other retailers, such as Amazon, CVS Health and Walmart, build out their own primary care strategies.

It also will take time to see if the changes are paying off. A.J. Rice, a managing director at Credit Suisse, wrote in an investor note that the company’s new strategy, while more focused, is still a “show-me story.”

Some capital required
At the crux of Walgreens’ primary care strategy is its partnership with VillageMD. The idea is for the clinics to integrate with Walgreens’ pharmacies, so that a patient’s doctor and pharmacist can know if they experienced a bad side effect or high copay with their prescription.

“Starting with a handful of clinics, we’ve proven this model really does work,” VillageMD CEO Tim Barry said in a Zoom interview, adding that the clinics had garnered net promoter scores in the high 80s.

So far, Walgreens has committed to invest a total of $5.2 billion in VillageMD, with plans to have 80 clinics in its stores by the end of the year, and more than 1,000 by 2027. That’s about a ninth of Walgreens’ total stores across the U.S.

Barry said VillageMD will be in “a big chunk” of the top 100 metros across the country, though it’s also looking at some rural areas and other underserved communities. They’re currently located in Houston, Austin, Phoenix, northern Indiana and Orlando, with plans to expand to Tampa next.

Rather than acquiring VillageMD outright, Walgreens intends for it to continue to operate independently, including a planned IPO next year. Going public would give it access to more capital, while also allowing Walgreens to continue to make more investments.

“Our business is a business that will require capital to achieve the entire growth ambition that we have,” Barry said.

Walgreens expects to see a boost to its bottom line from the clinics starting in 2024. However, analysts were a bit skeptical, expecting it might take longer for Walgreens’ new healthcare segment to gain steam.

“While we certainly believe in the growth potential of the various assets that make up the segment, we wouldn’t be surprised if it took longer than expected to achieve the 6.5 to 7.5% (adjusted earnings-per-share) growth target, as others who have endeavored to push further in healthcare have typically had setbacks,” wrote Charles Rhyee, a managing director at Cowen and Company, in an investor note.

Scott Shreeve, CEO of primary care business Crossover Health, summed up those challenges as he noted the influx of interest from retailers.

“There is an increased level of interest to solve the incredibly challenging problem of care delivery in our country,” he wrote in an email. “It’s encouraging to see those with scale and reach step up, but as we’ve seen in the past, it’s very easy for some entrants to get discouraged given the barriers and systemic inertia that have maintained our broken healthcare system for so long.”

Moving beyond colds and flu shots
Walgreens has long desired to play a bigger role in bringing the convenience of primary care to customers. But it has faced several setbacks along the way, including shuttering several walk-in clinics, and a fraught partnership with now-defunct blood testing startup Theranos.

Walgreens had partnered with the buzzy blood testing startup back in 2013, opening dozens of wellness centers in its stores. Three years later, it cut ties with the company, citing bad test results as Theranos faced a criminal investigation and a growing number of lawsuits.

The concept of retail health itself is nothing new. CVS began building out its first MinuteClinics in the early 2000s, and Walmart, too, has tried several renditions of in-store clinics.

Now, these companies are starting a bigger push into healthcare, with the idea of becoming a place that patients go to for more than colds, ear infections or UTIs. They want to become patients’ primary care providers, and help them manage more complex conditions over the longer term.

Some patients will still prefer to keep their primary care doctor, and industry groups, such as the American College of Physicians, recommend against retail health clinics for chronic and complex disease management. But experts following consumerism in healthcare said it makes sense that retailers are heading in this direction.

Neal Batra and David Betts, who have studied consumers’ thoughts on healthcare for Deloitte, said people are primarily looking for three things: meaningful interactions with their provider, visits that make economic sense, and convenience. Booking a visit a month out to spend 10 minutes with a doctor ticks none of these boxes.

“We’ve believed for a long time that this is the direction that consumer healthcare will go. What we see now is that playing out,” said Betts, who leads the public health transformation effort for Deloitte Consulting.

The pandemic, in some ways, accelerated that. People didn’t want to sit in busy waiting rooms, and were more open to other care modalities, like telehealth. Pharmacy chains were also given big contracts for Covid-19 testing and vaccines, driving more people to their stores.

Batra, a principal in Deloitte’s Life Sciences and Health Care practice, said “it’s super logical” for retailers to look at primary care, because it involves routine visits and engagement points.

“It’s a very natural place to enter,” he said. “Are you going to see some of these models continue what we would call an upmarket march to go after more and more complex aspects of primary care, or even dip their toe into specific therapy areas that are more specialized? It remains to be seen, but our expectation is yes.”

For example, pharmacies could offer blood-pressure measurements, and blood-glucose testing for people with prediabetes or diabetes. For retailers, the cost of doing this would be relatively low, while the value for patients would be high.

Other retailers are thinking about this as they chart out their own aggressive plans. CVS is on track to remodel more than 1,000 of its stores into “HealthHUBs,” with more space dedicated to health services, and recently hinted at plans to turn some of its stores into primary care clinics.

The company wants to steer patients to these locations through subsidiary Aetna, which has been testing new insurance models that offer visits at CVS’ MinuteClinics with no copay. At the same time, CVS will shutter 900 of its pharmacies in the next three years, as it pivots to this new strategy.

Walmart, for its part, has built out 20 health centers attached to its stores, bringing together primary care, therapy, x-rays, dental care and other preventive services in one place. It also recently acquired telehealth startup MeMD, began integrating with Epic’s EHR, and recently hired Ochsner’s Dr. David Carmouche to head up its clinical care projects, according to Insider.

Who will succeed?
With the $5 billion chunk of change Walgreens is spending on these clinics, “they’re all in now,” said James Gardner, a Boston-based retail consultant. “This is it. It’s either going to work or not going to work.”

It’s too early to say how the different competitors will stack up against each other, but there are lots of reasons to pay attention. Deloitte’s Betts sees the current landscape as several early versions of new models, but not a finished product.

“What we see today, it’s certainly not an endpoint,” he said. “We are seeing competition. We are seeing various large retailers, technology companies, and startups trying to compete on different bases of competition for the retail health consumer.”

One group stands to lose the most. Betts didn’t mince words when he said health systems, in some respects, should be “terrified,” as these efforts on the fringes start to move upstream.

As for the victor?

“It’ll remain to be seen who wins in that market,” he said. “It’s kind of exciting to see real competition emerge.”