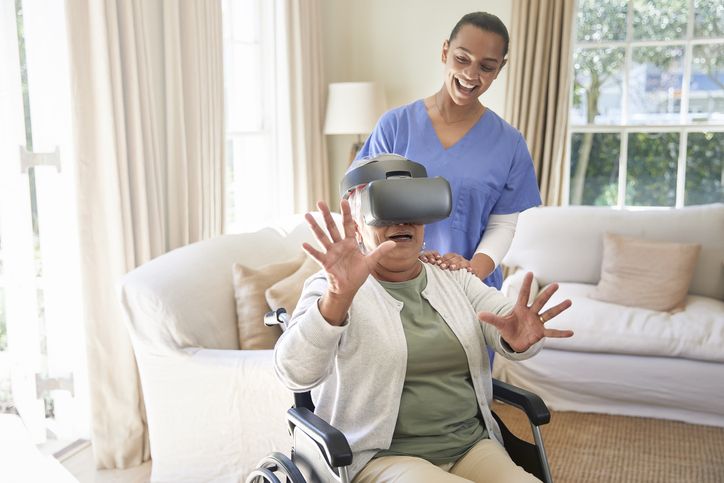 As the healthcare industry struggles to emerge from the Covid crisis, we’re rapidly turning to new solutions to deal with the unprecedented influx of patients. To manage the intake, parking lots are becoming care units, the traditional waiting room is being re-made or being discarded altogether.

But there’s one experimental solution that’s rarely tried, even though its efficacy for relieving stress and discomfort has been demonstrated time and again: Virtual reality.

To be sure, VR is already accepted by the surgery wing of the profession, which effectively uses it in training simulations. There’s also some very promising use cases for pain reduction for burn victims. But I’m referring to the palliative care that even consumer level VR devices such as the Quest from Facebook (now rebranding as Meta) can provide.

There are dozens of simple but compelling immersive apps in the Quest app store (many very low cost if not free) that could be incredibly valuable for a wide variety of health care patients: Easy to play games that alleviate boredom, immersive environments that reduce stress or chronic pain, multiplayer worlds that create a sense of social connection, and beyond. And unlike standard video games, most of these are quite accessible to non-technical patients: Rather than learn a confusing set of gamepad buttons, all that’s usually required is to move their hands and look around. As for set-up, any technically proficient healthcare staffer can sanitize the equipment and set up a patient for the experience in a matter of minutes.

I’ve broached this topic with numerous health care professionals but their reply is almost invariably on the order of, “Sounds promising — send us some research literature.”

Part of the problem here is the medical field’s scientific mindset, where a raft of clinical trials are first expected before adoption is even considered. While that is of course an extremely valid consideration in the operating and treating stages, it can be stifling when over-broadly applied to the entire life cycle of the patient experience.

Just consider the standard waiting room. Nearly all of them now have flat screen televisions blaring at patients and their families at all hours, though it’s unlikely hospitals demanded evidence of their efficacy at addressing patient stress and boredom levels, before installing them. So why so much scrutiny and hesitation before experimenting with consumer-level VR headsets, which are now roughly the same price as those waiting room TVs?

At the same time, the VR industry could be a much better advocate for itself in healthcare. While Facebook’s Quest line of headsets has made slow but steady progress in the consumer market, it ignores the potential demand from 4,000 U.S. hospitals dealing every day with millions of patients. (And unlike impatient gamers, who often balk at the VR set-up process, healthcare patients often have nothing but time.) Further, Oculus’s unnecessarily complicated set-up may be a friction point for many; even more concerning, the Facebook ID log-in requirement is a privacy red flag. (Older cord-free models, such as Samsung’s Gear and Google’s recently discontinued Daydream, which don’t require Facebook log-in, could find a ready new market here.)

The healthcare industry is admirably innovative with patient treatment, but painfully less so when it comes to patient comfort.  And unfortunately, the need for taking leaps of faith with the latter in the pandemic era is acute, and won’t go away any time soon. And I strongly suspect that stabilized Covid patients in particular could benefit enormously from VR, during their long recuperation period. Only recently struggling for breath, now facing the prospect of staring at the opposite wall for weeks, can instead spend much of their time in recovery lying in a peaceful, breezy forest that seems rich with alpine air.