This startup wants to build a needle-free CGM using nanotechnology 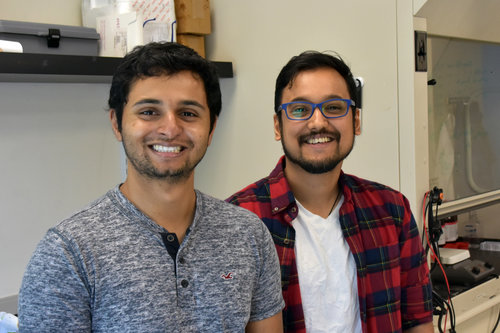 Graphwear co-founders Saurabh Radhakrishnan and Rajatesh Gudibande want to make CGMs that use nanotechnology to measure blood glucose levels. Photo credit: GraphwearIn the U.S., roughly half of patients with Type 1 diabetes use continuous glucose monitors (CGMs), and worldwide, the number is much lower. A startup hopes to change that by making CGMs more accessible using a needle-free version of the device.

San Francisco-based Graphwear recently raised $20.5 million in funding led by venture capital firm Mayfield. It plans to use the funds to further develop its nanotech-based CGM device, grow its team and conduct more trials to prepare for a regulatory submission.

President and co-founder Rajatesh Gudibande said the startup had run a small feasibility study to see if the data from the device could be comparable to measurements from blood draws, though it hasn’t yet released the results. It’s launching another trial as the company plans to seek FDA 510(k) clearance for seven-day use of the device in people with both Type 1 and Type 2 diabetes.

Currently, CGMs take readings from the interstitial fluid, a layer of fluid just below the skin. Graphwear instead uses a sensor to bring glucose molecules to the surface of the skin, where it can detect them and transmit that information to users’ phones. It’s currently testing its device as a wrist-based sensor, or as a patch that can be worn on the lower abdomen.

While wearing the sensor on the abdomen is most accurate, having it on patients’ wrists is a “whole different experience,” Gudibande said. “They don’t feel like a patient.”

A handful of other startups have tried using nanotechnology for glucose measurements, but so far, the technology is in its early stages. According to an article published in Nature in 2015, the biggest challenges include lag times, precision, and difficulty with patient use.

For Graphwear, one of the biggest challenges so far has been making sure the devices are rugged enough.

“How do we make sure it works repeatedly, reliably with someone with minimal training?” he said. “That is the hard part. That has taken a long time.”

Gudibande and Saurabh Radhakrishnan started Graphwear in 2015. Gudibande, who has a master’s in biotechnology from the University of Pennsylvania, got into the field after a painful brush with malaria in undergraduate school. He was in a remote town, and it took a long time to reach a diagnosis as the samples had to be sent three hours away to the nearest city.

“I learned the medications were there, the doctors were there, but the lack of information and lab tests made it hard,” he said.

He hopes in the future that the device can make treatment easier to access for patients with Type 1 or Type 2 diabetes, and in the longer term, he also wants to build sensors to detect other biomarkers related to metabolic conditions, including insulin, cholesterol and cortisol levels.